It’s a small space with a big following that includes Serge Ibaka of the Toronto Raptors and Auston Matthews of the Maple Leafs, as well as the musicians Karl Wolf, Jazz Cartier and Belly.

“It’s been a process understanding our business and what our customers want,” says Dameion Royes, who is chief executive officer and co-owner of Brimz Group Inc. with business partner Jack Vilayvong. “But we know we’re doing something right when guys like [U.S. rapper] Swae Lee come here – the way he reacted to the product and the amount of product he bought, it affirms that we’re going in the right direction.”

The right direction wasn’t so clear to Mr. Royes five years ago, when he started to rethink his path in life and business. He had achieved a degree of success as partner and co-founder of Big It Up, a Toronto retailer that had initially sold men’s skincare products when it launched in 1996 before switching to hats.

“I had a great relationship with my partners – we had the nice house, the cars and all that stuff,” recalls Mr. Royes, who is in his 40s. “But by that time, I wanted to live together with my girlfriend and was making other life changes that were going against the grain of the business.”

Breaking up a business partnership to make way for changes in one’s personal life may seem like a drastic course of action. But it’s not that unusual for entrepreneurs to take a new direction once they’ve reached a certain level of success, says John Stix, a public speaker on leadership, corporate culture and transformation and co-founder of the telecom firm Fibernetics Corp. in Cambridge, Ont.

Not everyone can step away from the business they built. That’s why Mr. Royes’s decision to separate from his partners was a brave step, says Mr. Stix.

Despite efforts by all parties to work toward an agreement that would satisfy everyone, in the end the split was painful, says Mr. Royes. For one, the store his partners gave him had been a poor performer for Big It Up, he says.

“I had actually asked for another store, but my colleagues gave me this store,” he says. “I had to muster all my creativity to turn it around.”

Revenue at Brimz started at $200,000 in its first year and has since grown by about 30 per cent in each subsequent year, says Mr. Royes. The business, which he says generates a profit, has also expanded from its bricks-and-mortar beginning into online sales as well as vending machines at two sites, including Toronto Pearson International Airport.

“I have a friend in finance who tells me that this doesn’t happen commonly in retail,” says Mr. Royes. “He says it’s based on something magical we’re doing.”

The magic may be in the Toronto-loving culture at Brimz. At one point in the company’s infancy, Mr. Royes and Mr. Vilayvong started producing merchandise that reflected their love of the city and its musicians, artists and athletes. 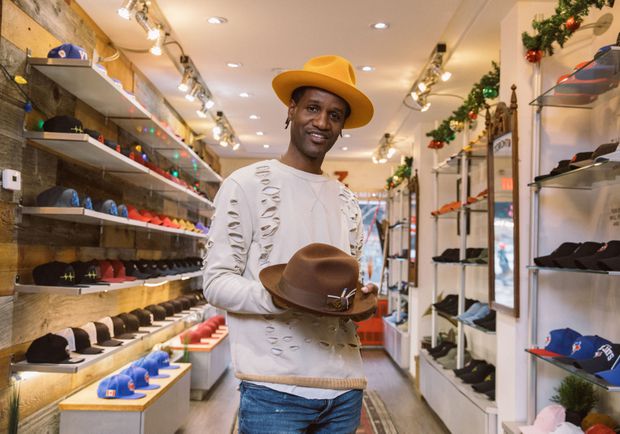 As Brimz grows, Mr. Royes is determined to stay away from the mass-market trap of simply cranking out merchandise. 'You need to have soul – it sucks to just sell product,' he adds.                 JENNIFER ROBERTS/The Globe and Mail

“Our caps sell the most, and the beauty is they extend us into different markets,” says Mr. Royes. “We design and manufacture caps for companies and restaurants, and when we’re creating tour merchandise for celebrities they consistently ask for caps.”

As Brimz continues to grow, Mr. Royes is determined to stay away from the mass-market trap of simply cranking out merchandise. Creativity is a currency, and “if you’re born to create you have to fight to do it by all means,” he says.

“You need to have soul – it sucks to just sell product,” he adds.

While that may sound like a commitment to keeping the business limited and small, there are many examples of successful companies that have built global empires on products that convey soul and creativity, says Michel Falcon, a Toronto-based expert on corporate culture.

“You could build a corporate culture on a vision of soul, and scale your company based on how you want your products to act and feel like,” he says. “Brimz is actually in a good position to be building its culture now because it’s much easier to define your organization’s DNA in the early days.

"And it sounds like they’ve got a good leader who’s already living and breathing his vision of soul every day.”

WHAT ARE YOU LOOKING FOR?

Continue shopping
Returns
You may exchange new, unworn merchandise, in its original condition, within 7 days of receipt date. Shipping charges are non-refundable. To complete the exchange process, we require a copy of the original receipt as proof of purchase.
Refunds (if applicable)
We have a no refunds policy, only in-store credit.

Late or missing refunds (if applicable)
If you haven’t received a refund yet, first check your bank statements. Then contact your credit card company, it may take some time before your refund is officially posted. Next contact your bank. Processing times may vary before a refund is posted. If you’ve done all of this and you still have not received your refund yet, please contact us at info@brimzofficial.com.

Sale items (if applicable)
All SALE items purchased are final cannot be refunded.

Exchanges (if applicable)
We only replace items if they are defective or damaged.  If you need to exchange it for the same item, send us an email atinfo@brimzofficial.com and send your item to: 311a Queen St. West Toronto, ON, CANADA m5v2a4.
Gifts
If the item was marked as a gift when purchased and shipped directly to you, you’ll receive a gift credit for the value of your return. Once the returned item is received, a gift certificate will be mailed to you. If the item wasn’t marked as a gift when purchased, or the gift giver had the order shipped to themselves to give to you later, we will send a refund to the gift giver and he will find out about your return.
Shipping
To return your product, you should mail your product to: 311a Queen St. West Toronto, ON, CANADA m5v2a4
You will be responsible for paying for your own shipping costs for returning your item. Shipping costs are non-refundable. If you receive a refund, the cost of return shipping will be deducted from your refund. Depending on where you live, the time it may take for your exchanged product to reach you, may vary. If you are shipping an item over $75, you should consider using a trackable shipping service or purchasing shipping insurance. We don’t guarantee that we will receive your returned item.

Do you want to add products to your personal account?